I am homesick. In other news, I seem to have read several books and not mentioned them here. No longer!

Ursula Nordstrom's letters (Dear Genius). Blew my mind every twenty pages as I started thinking of childhood classics (Trumpet of the Swan, for example) being made by people. And she was amazing at coaching, criticizing, and cajoling creative people from afar. Transferrable advice for my career.

A Deepness in the Sky by Vernor Vinge. Won hella awards and rightly so. Immersive, cerebral, satisfyingly huge. I love how there's "hard sf" here (the physics of space icebergs) and "soft" stuff like multiple well-realized alien sociologies and characters.

Scott Berkun's new public speaking book, Confessions of a Public Speaker. I just skimmed this since right now I think I need to concentrate on executing instead of reading inspiration or tips. Nice wackiness sidling in at odd moments -- who doesn't hate non-classy chandeliers? -- and a few ideas I needed to hear as I prep my Open Source Bridge talk (like exactly how to ask audience members to do some small-group discussion).

The Red Carpet: Bangalore Stories by Lavanya Sankaran. I picked this up in the Manhattan public library when I was looking for Dorothy Sayers. Most English-language Indian fiction isn't about Bangalore, so this is an ultra-specific YES YES SO RIGHT YES. Sankaran hooked me a few pages in by using the Kannada/English slang "one-thaara," ("a kind/type of") which I'd never seen written down before. The title story is so sweet!

The File by Timothy Garton Ash. As a grad student, he lived in West and East Germany. After the reunification, he reads his Stasi file, compares it with his own notes and memories, and interviews the Germans who informed on him. Riveting, funny, a quick and rewarding read.

For the Win by Cory Doctorow. Along the same lines as Little Brother -- thriller/polemic -- and I liked it about as much, although the ending seemed abrupt. I thought I'd just read the first few pages... and then ended up reading all of For the Win when I meant to be working, although I skimmed the "here is how economics works" bits. The bits set in India sounded fine to my diasporic ear, for what it's worth. Available as a free download, of course. 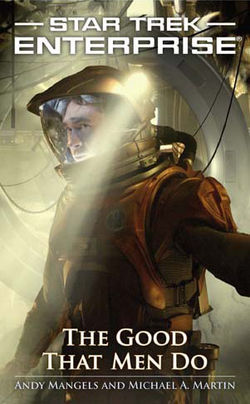 Star Trek: Enterprise: The Good That Men Do, by Andy Mangels & Michael A. Martin. If you know about the stupid and wrong thing that happens in the last episode of Star Trek: Enterprise then you may also know that this is one of the books that retcons it. I liked the plot and the relationships, but the writing was flabby. Funniest example:

In fact, Trip didn't recall, but he made no response, busying himself instead with the various controls that were arrayed before him. As the vessel's numerous interlocking systems continued powering up, Trip continued to study the consoles, hoping against hope that he wouldn't reveal his imposture to Ehrehin by appearing hesitant or bewildered by the flight instruments and indicators. Fortunately, Romulan instrumentation was fairly streamlined and straightforward, lacking an excess of confusing redundancy.

Most satisfying individual sentence in which the authors get in a few digs at the plausibility of the canon story:

Trip felt as though they were being almost too arch with these exchanges, but hoped that upon a close investigation of Enterprise's security logs, no one else would notice just how dunderheaded this entire piracy scenario really was.

Leonard saw the framing device, in which Jake and Nog from Deep Space Nine investigate implausible goings-on in canon, and decided there should be an entire series of such stories: Jake & Nog: CanonCops! Jake & Nog chould investigate "Similitude" from Enterprise and figure out why Phlox really decided to kill that sentient species. Maybe he's Section 31. And the warp 10/salamanders incident from Voyager, the de-evolving from "Genesis" (The Next Generation), and the Genesis Device (films) make no sense separately, but CanonCops! could retcon them into coherence.

While talking about The Good That Men Do, I mentioned to Julia that I should recommend a few Star Trek branded novels. Diane Duane is always a good bet: Doctor's Orders, The Final Reflection, and Spock's World are strong, and Doctor's Orders and Spock's World help me understand McCoy and Spock better. The Kobayashi Maru by Julia Ecklar tells how Kirk, Chekov, Scotty, and Sulu faced impossible tests when they were Starfleet cadets. None quite as memorable as "Lunch and Other Obscenities", but good. A Stitch in Time by Andrew J. Robinson is a deep, deep dive into Garak and Cardassia, written by the actor who portrayed Garak. It hints at Garak's queerness, if I recall correctly. And the anthology Tales of the Dominion War has a few stories I liked, about the fall of Betazed, a Romulan spy on Deep Space Nine, and a neutral race of engineers helping fugitives McCoy and Scotty.

When I was about fourteen, I used to really love Peter David's novels. Imzadi is a classic (and taught me completely legitimate therapeutic technique), Q-in-Law and Q-Squared are gripping and fun and make the canon universe make more sense, and Vendetta has a very creepy last page. But then I grew up and disliked his Arthurian novel and his She-Hulk and Babylon 5: Crusade work -- forced, glib, smarmy. So I can't say whether I recommend the stuff I read as a teen, and am a bit afraid the suck fairy has visited it. Same with Spartacus.

Of other interest: Dark Passions, one of those mirror universe novels that's just an excuse to turn all the Trek women into Hot Bi Babes. Ghost Ship, memorable to me chiefly because Picard decides to spend several hours in a sensory deprivation tank to help him make an important decision. Ultra-strange scene. And I have not yet read Planet X, the Star Trek/X-Men crossover novel, but realistically it's only a matter of time.

all of these books look great. adding to my goodreads!

So heaven is a slasher flick?

Questions (unanswerable?), and answers to non-questions

Some Upcoming Availability: Talks And Coaching