Yesterday we officially started the GNOME Marketing hackfest, centering on planning the release of GNOME 3.0 on 29 September 2010. Paul Cutler started us off by talking about goals for the week. He wants us to blog about what we're doing, and to take care to recap action items and follow up after this hackfest to execute them well.

Stormy Peters noted that we have a great, diverse set of skillsets in the room. The last hackfest did a lot of groundwork and generated a lot of ideas and action items. This time, we want to get a lot of immediately useful things *made*. 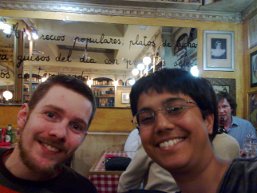 (Then we did introductions.)

Paul recapped the November marketing hackfest, which Jason Clinton and Stormy Peters blogged at the time.

I asked for a reminder of the GNOME mission: accessible, free, localized. We offer free desktop (technology) to everyone. We say "technology" these days because of mobile, cellphones, and so on, but mobile is not really what we'll talk about this week. For instance, the GNOME Shell team isn't targeting mobile handsets as a platform.

(One issue to address is GNOME panel applets. Everyone Vincent has talked with uses about three applets (out of about 20 available ones), but everyone uses a different set of three. So we need to work with the community to find a way to bridge that experience gap for GNOME 3.0.)

So here are some notes towards our marketing message for GNOME 3:

(As we talked about highlighting GNOME apps, we reminded ourselves of long-term marketing ideas, less for GNOME 3.0 than for future marketing work: a cross-platform App Store that senses your OS and shows you free GNOME apps to download. Another: tie together About boxes on apps to Friends of GNOME. Make it easier for users to realize that they can give back via cash donations. Store what app inspired them to give cash, and feed that app's About box with specific users' names, once donations pass a certain amount.)

In a sense, our list of audiences (in order of priority) is:

And a home for our GNOME 3 marketing message: gnome3.org. This will be a small, product-specific site that goes away (that is, redirects/moves to gnome.org) six months after the GNOME 3 launch (approximately). We're building the sitemap for it this week.

By the way, Paul and Vincent are going to coordinate on the improvement of the gnome.org website; evidently there's a relaunch in the works! Plone is involved somehow. 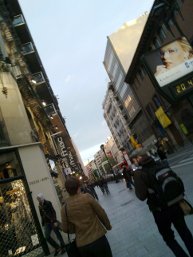 Stormy then led us through deciding what we'll do this week in the hackfest. HIGHEST priority:

And we roughly scheduled it as follows:

So Tuesday morning we worked on those talking points (soon to come to the wiki) and the launch roadmap (ditto).

After lunch, we finished our rough roadmap, then spoke about some various other topics before diving into website and Ambassador work. Bharat Kapoor suggested that we think about SMS fundraising at conferences, and about corporate sponsorship/involvement with Ambassadors.

As a group, we roughed out some ideas for what GNOME Ambassadors is (materials/collateral that anyone can use to evangelize GNOME) and for the website. One question re: the website: will it be a Plone site? There are some dependencies here regarding the existing website infrastructure and a delayed reboot; Ryan and I will talk about getting a project manager to do the CMS relaunch. In any case, we're going to go forward assuming that it's a Plone site that we can localize, and that the marketing team will own the responsibility for coding it and getting it up.

Then we broke into smaller groups to get more specific on the website and Ambassadors (to get wikified when we have time -- this week, I hope!) and developed some TODOs for the work session on Wednesday.

We also met local representatives who told us about the free software scene in Zaragoza and in Spain overall. We're so grateful to them for their hospitality and support!

(And throughout the day, we captured some other TODOs that we'll do after the hackfest...)

Now I know in part; then I shall …
GNOME Marketing Hackfest 2010, Day Two

In The Application Of My Seat To A Yoga Mat