To Build A WiFire

Nandini advised me that video chat with her fiance makes it far more bearable to be away from him, so I decided to investigate the Google Chat videochat integration in Empathy so I could videochat with Leonard for free without having to install anything proprietary (read: Skype). It worked fine between my and Leonard's Ubuntu machines when we were in the same apartment in the States, but my Empathy froze up when I tried to initiate an audio or video chat from here in Mysore. That was just over wifi, though; it kinda worked when I plugged into an Ethernet cable. Kinda. (I hereby apologize to my former coworkers and the GNOME community for not actually making efforts at debugging this yet; I may poke at it soon.)

Over two days, my pal James A., a sysadmin who lives in Perth (Western Australia) and thus inhabits a time zone suddenly much more congenial to random conversation, spent at least 90 minutes on the other end of the notional line, helping me work out a few hitches and exchanging the most boring possible text and audio chat with me. "I can't hear you." "Oh, my mic was muted." That sort of thing, interrupted of course by talking about themes in Snow Crash and The Diamond Age.*

From the middle of that: "OK, now your face is just a bunch of blocky squares." "Yeah, that's a natural consequence of aging. I learned that from moisturizer ads. If you don't use Oil of Olay then your face gets all pixelated."

From the end of one troubleshooting session:

Sumana: Well I think we've all learned a valuable lesson today
Sumana: and that lesson is, never make a friend who does not live in your postal code
Sumana: and never leave said district
James: or take them with you
Sumana: Yes!
Sumana: Katamari them on up

It was around then that, while out on an errand, I thought I'd buy a longer CAT-5 (Ethernet) cable, since the one I had wasn't long enough to snake to my room from the router. So I walked to the computer-stuff shop a few blocks away.

"I need to buy an Ethernet cable. Do you sell them?"

We clarified that we were talking about the same thing. I shoulda just said "CAT-5."

"What length do you want? One meter, five meters?"

"What length do you want?"

"Just tell me what you have. What's the longest cord you have?"

"We have all lengths, which do you want?"

I sighed, said I was bad with meters, and estimated I wanted about 30 meters' length. That's when he went into another room and got out the mega-spool of CAT-5 and the hand-held crimper.

Oh. If only I'd brought my crimper! I knew how to do this, once! 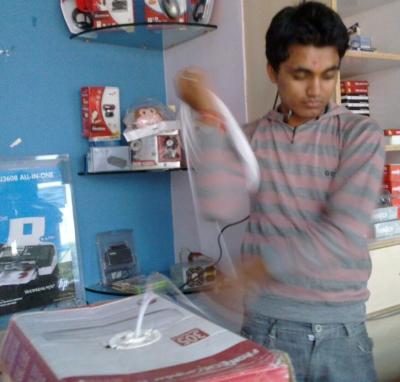 Rakesh cut off some insulation, got the wires in order (asking me what I meant to do with the cable so as to check crossover vs. patch), cut off the extra wire length, pushed the wires into the connectors, and crimped them into place. Then he tested the cord with a handheld device and frowned, then cut off one of the ends and started again. After this had happened a few times, we commiserated about Rakesh's inadequate crimper, which wasn't forcing the wires all the way into the connector with a nice click. I ended up going home and coming back for it an hour later, after he'd switched crimpers. Cost: 365 rupees (50-rupee crimping fee plus 9 rupees a meter), or about USD8. Carrying a 35-meter coil of CAT-5, tied with a couple pieces of string, on my shoulder down a muddy Mysore lane made me feel an authentic part of the Indian tech scene.

What also made me feel authentic was coming home to discover that construction workers a block down had accidentally cut a line while digging and my household had neither landline phone nor broadband. The next day, Mom called The Guy She Knows at the telco, who came down and fixed it. I tried to talk with him in my incredibly broken Kannada plus Internet-related nouns. Sample, translated for sense into English: "Yes, cell phone, 3G, AirTel, it is. Right now, wifi do." He told me that WiMax has successfully launched in Kerala and is coming to Mysore, which led me to ask excitedly, "Mysore WiMax ya-wa-ge?" or "Mysore WiMax when?" which sounds like I'm some sort of Wired-reading Conan the Barbarian. About 15 days from now, apparently.

His colleague didn't speak as much English, so when I mentioned that I lived in New York City, this got reiterated/translated as: "She lives in America. New York City. A very big city. There was a bomb. [hands sweep across each other, like buildings falling down]"

"Yes, that's where I live," I agreed quietly. 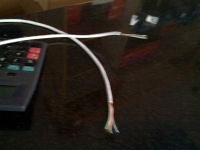 I got to see a minuscule slice of that city yesterday, when I videochatted with Leonard.** (For now it's soundless video + a plain telephone call for audio; more troubleshooting is in our future.) A less sweatshoppy laptop, some open protocols and FLOSS software, a friend's help, a bespoke Ethernet cable, innumerable components and stories and wires and decisions forming the infrastructure of the digital world, all so I could pretend to be a crab clacking my claws at my husband. Nandini was right.


* I mentioned that Stephenson is obsessed with how to best arrange for institutions to keep going past any one member's death, and James pointed out Uncle Enzo's career and his disdain for the Young Mafia. Also, when James mentioned that WordPress is written in PHP, which is really itself a CMS, I called WordPress "an unstable sedan chair atop a drunken Godzilla," which I don't stand by, but which is funny anyway. WordPress is more stable since I last had to work with it and I shouldn't be so hard on it, especially since they folded the great WordPress MU back into trunk. I am curious about Melody, though.

** "Just so you know, since I introduced you to Beth and Pat and Lucian, I expect a commission." "Oh, okay. Some kind of friendship commission?" "A blue-ribbon commission." Plus me listing off a bunch of names and him adding one more. What do these people have in common? Randall Munroe, Vienna Teng, Jonathan Coulton, Ken Liu, Charles Stross, Darcy Burner, Seth Schoen, Vernor Vinge, Ellen Ullman, Joel Spolsky, Eric Sink, Ryan North, Neal Stephenson, Paul Graham, John O'Neill, Naomi Novik, Kristofer Straub, Leonard Richardson, and arguably Jerry McNerney.

After A Rainy Night
On Repeat

Tata Photon not available in Mysore ?

It was nice to read about your experience and issues.

I guess we are a lot of people with similar needs and backgrounds. My family also needs to communicate in and out of both developing countries and the more developed world.

This is a area where there are corporate sponsors, a active community, and active development. This kind of blogs gives inspiration to help improving peoples life with easy to use communication.

I'm enjoying this series of posts.

I wonder whether the N900's video chat software would have any kind of edge over Empathy in this circumstance.

I loved this post (and had to savagely edit a quote from it to fit it on twitter; sorry!).

I feel like I should know what they have in common, but all I can come up with is "Internet heroes."

Have they all eaten lunch with you at some point? I ... got nothing.

Thanks for sharing your experiences, though. I really love reading them.

As the person who introduced YOU to Beth and Lucian, I expect a kickback. In fact, everyone should tithe back up the chain whenever they meet anybody else.

"My empathy froze up" has a neat transhumanist-fiction sound to it.

I can now videochat over wifi! Audio from the other side is choppy, but they hear me fine. More investigation is required.

The set of folks from the second footnote: they all have done substantial programming or CS work and brought that domain knowledge and skillset to some other field of endeavor. I'm especially interested in the musicians, fiction authors, and other artists, and the politicians.

Sankar: I shall look into it! I think it might be. Only after seeing your mention of it did I notice the TV ads.

Martin: Glad you liked it!

Thomas: Yay! And yeah, I should try using the N900, especially now that my wifi situation at home has improved. (A frayed cable got replaced, I think.)

Brendan: I feel your woe re: coerced concision. Glad you liked the piece! And I think that's a fine guess.

Julia: Glad you liked the posts! I've had lunch or an equivalent meal with about eight of those twenty. Not sure about Paul Graham because I'm not sure whether mass meals at Foo Camp count.

Avram, what if I said it while claiming to be William Gibson or equivalent?