Two OSCON Conversations, And A Trip Report Between Them

Hi, reader. I wrote this in 2016 and it's now more than five years old. So it may be very out of date; the world, and I, have changed a lot since I wrote it! I'm keeping this up for historical archive purposes, but the me of today may 100% disagree with what I said then. I rarely edit posts after publishing them, but if I do, I usually leave a note in italics to mark the edit and the reason. If this post is particularly offensive or breaches someone's privacy, please contact me.

Conversation the last night of OSCON, reconstructed from memory:

"So, Neil Young --"
"The singer-songwriter?"
"Yeah."
"Man, what a white guy name."
"Are you impugning Neil Young? That man sells organic eggs at the farmer's market in my hometown!"
"Are you sure they're organic? You sure he doesn't just get them from Sysco?"
"Sysco doesn't even sell organic eggs."
"Uh, actually Sysco does sell organic eggs."
"Yeah right. I bet it's, like, orgänic, with an umlaut, so it can get around the FDA rules on calling things 'organic'."
"Yeah, and that's also how they get around the rules on Appellation Contrôlée."
"Anyway, Neil Young has a son who really likes model trains, and so he does model train stuff, and he actually has multiple patents related to model trains."
"Patents? Is he part of the Open Invention Network? Is this a defensive patent portfolio against Big Train?"
"You mean Supertrain?" 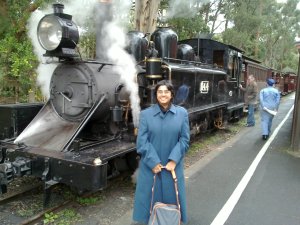 In honor of late-night wackiness, I have not actually fact-checked whether Neil Young has any model train patents, or whether he or Sysco sell organic eggs. Caveat lector et caveat emptor.

My last visit to OSCON was in 2011, when I had worked for the Wikimedia Foundation for under a year, and wanted to build and strengthen relationships with the MediaWiki and PHP communities. I remember not feeling very successful, and thinking that this was a conference where executives and engineers (who in many cases are not terribly emotionally passionate about open source) meet to hire, get hired, and sell each other things.

These days, it turns out, OSCON is basically aimed at me! Because I am an executive trying to sell my services (e.g. get hired on an as-needed basis) to engineers and executives who make or depend on open source -- including the passionate ideologues, the burned-out used-to-be-passionate folks, the pragmatists, and all manner of other types. Changeset Consulting was novel, relevant, and interesting to approximately everyone I spoke with. Also, in the intervening five years, I've grown in skill, stature, reputation, and network. So I had something interesting to say, and O'Reilly accepted a talk proposal of mine for the first time. I saw scores of acquaintances, friends, peers, and colleagues in the halls and session rooms this year; I know and am known, which helps me feel at home.

I'm grateful to Audra Montenegro at O'Reilly Media for her speaker support. She worked with O'Reilly to cover my flight plus two hotel nights in Austin, making it possible for me to attend OSCON. She and other O'Reilly folks paid and worked with White Coat Captioning to provide CART (live captions) for my talk, at my request. And I was concerned that talking about inessential weirdnesses and inclusivity in open source upped my risk of harassment, so she arranged for some extra security for me. I'm also grateful to Andy Oram, my session chair, for his careful pre-conference prep (including checking on my pronouns -- she/her, thanks!), and for running a written Q&A session at my request.

I shall carry with me several memories of this OSCON, such as:

But here's a conversation that I particularly find stays with me. I was on the expo floor, talking with an acquaintance, and a stranger joined our conversation. I'll anonymize this recollection and call him Cyclopes.

He heard about the consulting services I offer, which focus on short-term project management and release management for open source projects and for companies that depend on them -- maintainership-as-a-service, in short.

Cyclopes: "Can you come to my company and tell us that the way we're doing deployments is all wrong, and tell them we should do it my way?"
Sumana: "Well, if your company hires me, and I assess how you're doing deployments and I think it's wrong, and I agree with the approach you want, then yes."
Cyclopes: "Great!" [explains his preferred deployment workflow, with justification, and says that it's like bashing his head against a brick wall for him to try to convince the rest of his company to do it]
Sumana: [lightheartedly] "So it sounds like what you really want is more a sockpuppet or an actor! Which might be cheaper!"
Cyclopes: "Hmmmm! You know, that is kind of what I want!"
[we three jest about this]
Sumana: "But, in all seriousness, like, you could go aboveboard with this. You know, you have options -- fraud and deception, or actually trying to persuade the other people in your org .... or, this is a wild guess, have you kind of burned bridges by being really abrasive, and now they won't listen to you?"
Cyclopes: "Yeaaaaaaaaah that might be what's happened."
Sumana: "OK! That totally happens and you weren't the first and you won't be the last."
Cyclopes: "Like, I've sent some pretty flame-y emails."
[acquaintance nods in sad agreement; we are all sinners here]
Sumana: "Oh man, the emails I've sent. I am so embarrassed when I look back. But you can come back from this. You really can. If you demonstrate to those people in your org that you really want to repair those relationships with them, they will respond. Like, if you say to them, 'I know I burned bridges before, I'm sorry about it, can we talk about this problem,' and you actually try to listen to them about what they need and what their context is, what they're worried about and what problems they're trying to solve, they will work with you, so you can figure out something that works for everybody. There's a book about this, about negotiation, that's a really short, quick read, it helped me a lot: Getting to Yes by Fisher and Ury."
Cyclopes: "Let me write this down." [notes book title and author on the back of my business card]
Sumana: "There you go, some free consulting for you. It's totally possible."
Cyclopes: "I think I could use that, I'm ripe for that kind of personal transformation in my life."
Sumana: "Great! Please, seriously, let me know how it works out."

Memory is unreliable, but I cannot forget the speed of my diagnosis, nor that this guy literally said that he was ripe for the kind of personal transformation I was prescribing. It's no model train patent but I think I'm happy anyway.

MOSS Video, BSSw Honorable Mention, and The Maintainership Book I Am Writing

MozFest 2021 Followup: How To Get A Project Unstuck