On Noticing That Your Project Is Draining Your Soul

I was talking with a fellow consultant about what to do if you have a gig getting you down. Especially when you realize that the client isn't being helpful, and there's a bunch of learning curves that are exhausting you, and you still have several weeks to go.

In my master's in tech management coursework, I learned the lens that thriving is a function of a person times their environment. I think those of us who are used to trying harder, overcoming obstacles, etc. can be -- kind of out of self-protective instinct -- bad at noticing "this environment is so crappy it makes it systematically hard for me to achieve and thrive". Especially with short-term projects. At first, things like "I feel tired" or "ugh, new thing, I don't want to learn this and be bad at it (at first)" and "I'm worried that person doesn't like me" or "they missed the email/meeting/call and now it's harder to execute the plan" are identical to problems that we are reasonably sure we can overcome. Maybe we notice patterns about what's not working but think: I can take initiative to solve this, myself, or with my few allies. 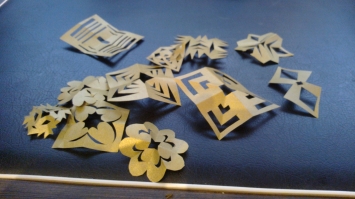 The data points accumulate and we chat with other people and, in the process, learn more data points and shape our data points into narratives and thus discover: this is a bad environment, structurally. But by the time we really figure out the effect a short-term project is having on us, it's supposedly the home stretch.

I'm looking back at gigs that I found draining, where, eventually, I had this realization, although I have never quite framed it this way before now. On some level I realized that I could not succeed by my own standard in these projects/workplaces, because there was so much arrayed against me (e.g., turf war, a generally low level of skill in modern engineering practices, lack of mission coherence, low urgency among stakeholders) that I could not do the things that it is kind of a basic expression of my professional self/competence to do.*

So I had to change what it was I aimed to achieve. For example, I've had a gig where I was running my head into the wall constantly trying to bring better practices to a project. I finally talked with an old hand at the organization and learned the institutional reasons this was practically impossible, why I would not be able to overcome the tectonic forces at play and get the deeper conflicts to resolve any faster. So we changed what I was trying to do. Running a daily standup meeting, by itself, is a thing I can do to bring value. I changed my expectations, and made mental notes about the pain points and the patterns, because I could not fix them right away, but I can use those experiences to give better advice to other people later.

An editor recently told me that, in growing as an editor, he'd needed to cultivate his sense of boredom. He needed to listen to that voice inside him that said this is boring me -- and isn't that funny? Parents and teachers tell us not to complain about being bored -- "only boring people are bored", or -- attributed to Sydney Wood -- An educated man is one who can entertain a new idea, another person, or himself. But pain is a signal, boredom is a signal, aversion and exhaustion are signals. Thriving is a function of a person times their environment.

Also, the other day I read "Living Fiction, Storybook Lives" (which has spoilers for Nicola Griffith's excellent novel Slow River).

How come I spent many years living a rather squalid existence... yet managed to find my way out, to the quite staid and respectable life I have now, when others in the same situation never escaped? In the course of writing the book, I found that the answer to my question was that the question itself was not valid: people are never in the same situation.

It takes substantial introspection and comparison to figure out: what kind of situation am I in, both externally and internally? Is it one where I will be able to move the needle? It gets easier over time, I think, and easier if I take vacations so I can have a fresh perspective when I come back, share my stories with others and listen to their stories, and practice mindfulness meditation so I am better at noticing things (including my own reactions). Maybe "wisdom" is what feels like the ability to X-ray a messy blobby thing and see the structures inside, see the joints that can bend and the bones that can't. In some ways, my own motivation and mindfulness are like that for me -- I need to recognize the full truth of the situation I'm in, internally and externally, to see what needs changing, to see how I might act.

The thing that gets me down most, on exhausting projects, is the meta-fear that nothing will improve, that I am stuck. When I realize that, I try to attend to that feeling of stuckness. Sometimes the answer is in the problem.


* As Alexandra Erin discusses, regarding her political commentary via Twitter threads: "I do the work I do on here because I feel called to it. For the non-religious, I mean: I have a knack for it and I find meaning in it."

In Black
Supporting Int 1696-2017 for Source Code Transparency in …

Now Imagine Switching The Lead Actors For Those Two Shows