I read the comic book version of the Mahabharata as a kid (thank you, Amar Chitra Katha!) and many of its stories stayed with me. As I recollected in a newspaper column in 2005:

Yudhisthira is an incredibly virtuous man, and is in fact the son of the god of dharma (righteousness and duty).

Yudhisthira has never spoken a lie. The gods so smile upon him that his chariot floats an inch above the ground, never touching the dust.

As planned, this breaks the other warrior's heart, and he recedes from the battle.

But because he lied, Yudhisthira's chariot falls upon the ground, never to float again. 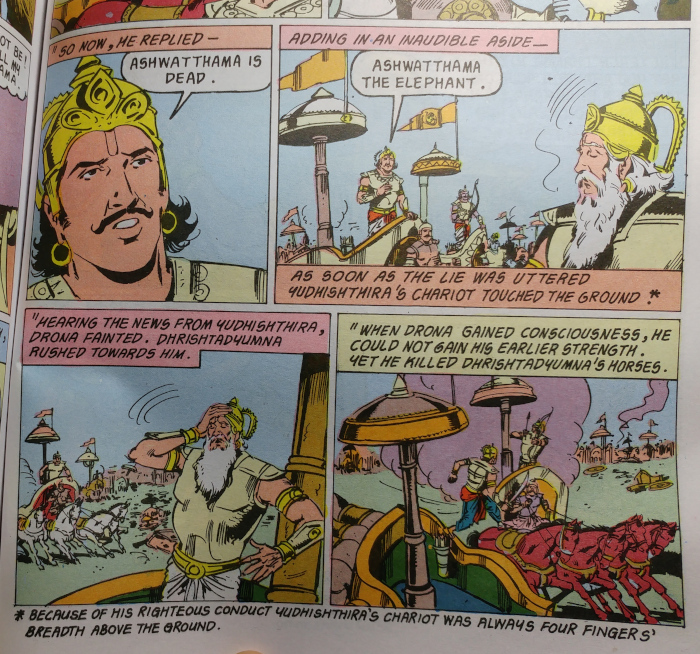 So now, he replied: "Ashwatthama is dead." Adding in an inaudible aside -- "Ashwatthama the elephant." As soon as the lie was uttered Yudhisthira's chariot touched the ground.* [We see Yudhisthira standing in a chariot in the background, and Drona in the foreground, visibly overcome.]

Hearing the news from Yudhisthira, Drona fainted. Dhrishtadyumna rushed toward him. When Drona gained consciousness, he could not gain his earlier strength. Yet he killed Dhrishtadyumna's horses. [We see him take aim at some horses with his bow and arrow.]


* Because of his righteous conduct Yudhisthira's chariot was always four fingers' breadth above the ground.

It surprised me to see this, going back to the comic, because I honestly remembered the speech bubble looking like:

ASHWATTHAMA the elephant IS DEAD.

Anyway, now you know one particular reason why Four Seasons Total Landscaping reverberates inside my being like a perfect joke outside of time.

An extended narrative on teaching, comedy, and temperament

As long as I'm talking about comics: the other day…

Reluctance To Process Contributions, and Tips from InnerSource