I had a wonderful time at this year's Open Source Bridge conference. Last year at OSBridge, I presented "The Second Step: HOWTO encourage open source work at for-profits" and had a great time. So this year I spoke on technology management, with the fairly ambitious title "Learn Tech Management in 45 Minutes". Addie Beseda reported such a high turnout that people were standing in the hall outside the door listening to the talk, which blows my mind. Audio and polished notes coming soon; slides & nearly complete notes available now. 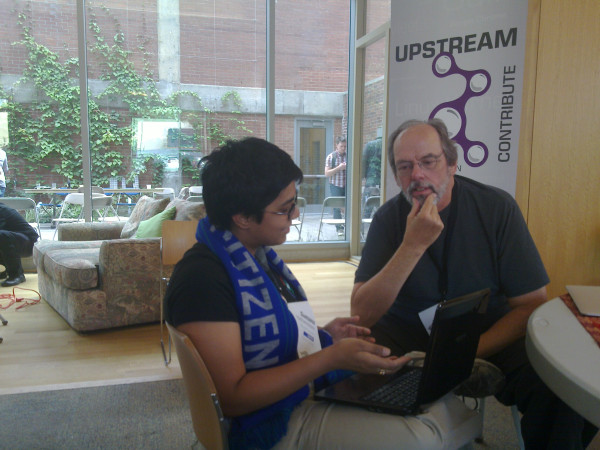 Because we released MediaWiki 1.17.0 (after 11 months of development and review!) while I was in Portland, I also led an unconference session on "What's new in MediaWiki 1.17 and How You Can Help". People volunteered to help us with PostgreSQL support, testing, design ideas, bug triage, the parser, and more. And I got to talk about the new release with Ward Cunningham, who invented the wiki. That has got to be a Sumana career highlight.

I also performed some geeky stand-up comedy, and people liked that. So that's nice.

In between, I saw new friends and old, talked up MediaWiki, told people about the zillion open positions for which Wikimedia Foundation is hiring, played Dance Dance Revolution, ate great food, and enjoyed the inimitable atmosphere of a great conference.

A few ego-stroking notes: Open Source Bridge's Melissa Chavez also interviewed me for an eight-minute video. And, with Asheesh Laroia and Igal Koshevoy, I was named one of three Open Source Citizens by the conference organizers. Thank you for the honor; I will wear my scarf with pride!

(Thanks to the Wikimedia Foundation for the plane flight, to the conference for letting me in free as a speaker, and to my friends Brendan and Kara for hosting me. Thanks to Reid Beels and John Parker for their photos, which are CC BY-NC-SA. Thanks also to Josh Triplett for his photo.)

On The Usefulness Of Writing
"Skilletron 2.0"

Glad you liked the photo!

Your post made me realize that I didn't actually put any kind of license on that photo. Please feel free to use it under CC BY-SA. (Know any good photo-hosting sites similar to twitpic that support license metadata, so I can just check a box to freely license photos I share?)

I am glad to hear it went so incredibly well! I look forward to hearing even more about it when I (hopefully) see you soon!<br/>C

Work And Being Realistic