Hi, reader. I wrote this in 2013 and it's now more than five years old. So it may be very out of date; the world, and I, have changed a lot since I wrote it! I'm keeping this up for historical archive purposes, but the me of today may 100% disagree with what I said then. I rarely edit posts after publishing them, but if I do, I usually leave a note in italics to mark the edit and the reason. If this post is particularly offensive or breaches someone's privacy, please contact me. 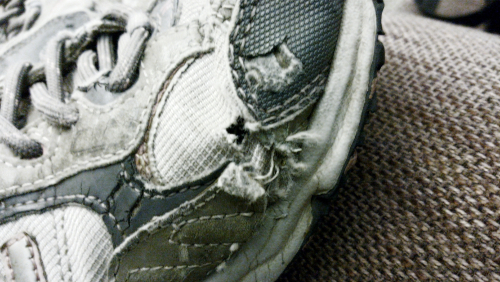 I spent a bunch of September in San Francisco, trying to tie up loose ends at work so I could go on my sabbatical with a free heart. My notebook says things like:

"30 is a large #" -- why? context
explain briefly when to use test 2 vs beta cluster
Say there will be 4 types of failures, then give numbers as you go

While there, I finally went shopping with Val and bought some new sneakers, so I could throw away my ratty old sneakers. I'd bought them in a fit of exercise-related optimism about seven years prior. I find it easier to buy clothes and shoes in other cities. I'm already off-kilter, disequilibrated, so why not add one more change, get one more bit of anxiety over with? 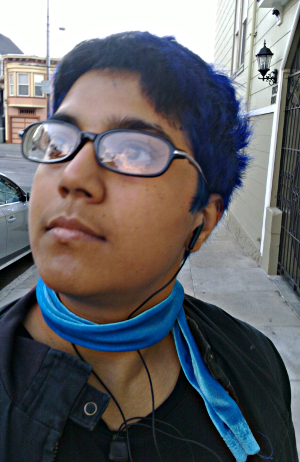 And during that trip, I went one step further: I went to a salon and got my hair dyed blue, like I'd wanted to for years. The dark blue only looks obvious in bright light, so people at work did double-takes, checking that their eyes' photoreceptors hadn't fritzed out. I'd never done anything that chemical to my hair before. I hadn't wanted to sadden my mom.

I got to Hacker School on September 30th and found out I was one of two women with blue hair. (We discovered quickly that we have a few mutual friends.)

The weather got cooler and cooler as we eased into our term and found our rhythms. The library got more books as people donated or lent them to the school; now there are huge gaps on the shelves as the books migrate to work tables. The kitchen has accumulated several different coffee-making gadgets, about ten containers of communal tea, and a steadily increasing stack of leftover paper napkins from takeout lunches. Most people sit in the same place every day now, as far as I can tell. Some prefer the beanbags, some the conference room with plenty of sunlight, some the standing desks, some the ABSOLUTELY NO TALKING quiet room, some the rooms with whiteboards, some the shared tables. I try to move around a lot.

For the first few weeks of Hacker School, I consciously basked in the number, diversity, and quality of the women in my batch. As the folks who run HS recently blogged, 42% of our batch of 59 are women. I look around the room and our chat channels and I see people helping and being helped, within and across genders. After the first week, I still hadn't learned all the women's names! Now I'm nearly used to the gender balance, but those first few weeks disoriented me in a good way, to tell the truth, and visiting non-HS physical and online spaces disorients me back. From the HS blog post:

One of the many benefits of having a gender-balanced environment is that, at least within the confines of Hacker School, the pressure to represent or focus on "women in programming" largely fades away, and people are free to focus on programming rather than rehashing tired arguments.

Focus on becoming better programmers: our guiding star. We try to avoid distraction (one guy said his phone battery lasts longer these days). But I feel guilt for enjoying our oasis and concentrating on myself, when I have so many sisters outside, wishing and working for environments a tenth as nurturing as Hacker School is. 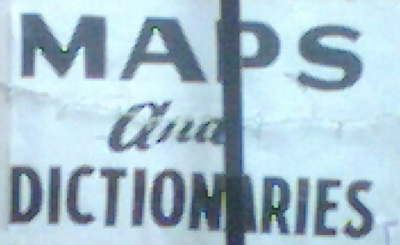 I take a walk most days. I'd never spent much time in the Soho/TriBeCa region before, and now I'm getting used to the tiny blocks and the tourists shopping for knockoffs on Canal. The other day I saw, in my meandering, a shop window advertising "Maps and Dictionaries," which amused me, because I've been improving my fluency in Python maps and dictionaries, and generally grokking things like data structures and lambdas and whatnot.

Yes, I like grabbing data from APIs and munging it, and I chortle when I can make the command line do new tricks. But oh wow, functional programming and hash tables make me clutch my head and shout superlatives and profanities. I'm beginning to get how mild-mannered programmers can turn into complete zealots about things like functional programming and structured data. Oh, who am I kidding -- I already thought I understood how people could do that, just for something to believe in, but now I see how I could turn into one of those evangelists, if this were the only revelation I'd ever had or thought I'd have.

My notes from the past five weeks include far less "tell $person about $thing" than usual:

Stopped when angry/tired, wrote down summary, got beer, got Joe, figured out was editing file that was not getting run (venv), started getting stuck in dependency hell (mysql?!) when checking whether problem was BZ-specific. Stopped for the day....

Some transformations make us over all at once, the same function applied uniformly to every element in a collection, from black hair to blue in an afternoon. Some happen to parts of us first, before other parts catch up, eventually consistent. I'd been programming for a long, long time before I called myself a programmer. I can't tell whether I feel arrived yet, whether I feel home. (We talk about progression in time as though it is progression in space, don't we? As though our lives are journeys, as though our schoolteachers are packing our saddlebags, as though a calendar is a map of time.) 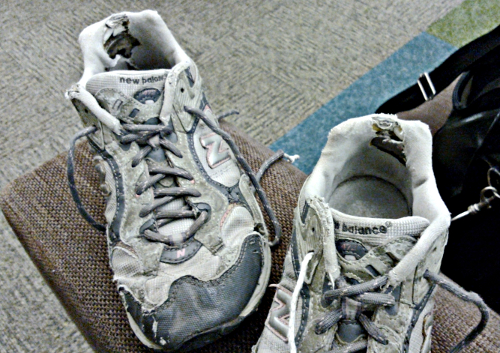 Last week, Leonard and Beth made brownies with marshmallows and M&Ms. I taught a few peers at Hacker School to play Once Upon A Time. Leonard and I watched "Wives", a feminist Norwegian seventies film. I learned lots of little things about zip, map, filter, reduce, databases, packaging, bpython, bash. I dressed up as "Futuristic Businesswoman Sumana" for Hallowe'en, in my green business suit that looks vaguely Vulcan (lapels are illogical). I got to question 11 in Python Challenge. I'm in the middle of reading about eight books. The dead leaves started piling up on the sidewalk, fun to crunch through, and the autumn rain started, although Saturday the sun stayed out. I walked to the theater and thought, it won't be this warm again for five months.

Every few days I remember that Aaron is still dead. And I think I dreamt about my dad a few times in October; in one dream I got confused, thinking, "wait, I thought he died already, how could he be dying again?" but that's something you don't say to the rest of your family, or at least something I don't say. I think I've gotten to the long prairie of life where I'll be going to more funerals than weddings from here on out.

In September, in San Francisco, a colleague asked me: why all these changes all of a sudden? The sabbatical, the hair, the shoes? And I asked whether she remembered Aaron Swartz. She hadn't known him, but she remembered the public mourning of his death. I told her what he'd said, the revolution will be A/B tested, and explained what he'd meant. We activists have a responsibility to use our energy well. I, in particular, believe I need to become a better software engineer so I can be a better social engineer. So, I told her, I drew two relevant lessons from Aaron's death:

Today I'll put on those new shoes and go to Hacker School, and drink tea, and learn from women and men some new thing that makes me swear aloud, that will help me fight. Everything that lives changes; the only way to stop changing is to die. If I find myself afraid of growing, I'll remember all the forces that don't want me to learn. Death being only one of them.

Emboss
Top, Iterators and Generators, and Git, Emacs, and …

A friend of mine is a Caltech alumna, from back when Caltech was too gender-imbalanced even for me to apply to it, somewhere south of 7:1.

And she hadn't even known how much she'd loved music. She'd known, but she hadn't known. And this is someone who went on to sing with the Tanglewood Festival Chorus. She's obsessive about it and she's very, very good.

Thanks for writing the kind of poetry my soul particularly understands.

Changing How I Deal With Those Humiliating Teenage Memories

Nurturing Volunteers: A Shortcut And An Event Template

"How Do I Accommodate This Person?" Ask JAN