Technothriller Book Review Partially In The Form Of A Python Exercise I am glad I read Hackster: The Revolution Begins..., a technothriller by Sankalp Kohli and Paritosh Yadav taking place in modern-day India. It's plotty and passionate and tense, and it's about Indians to whom India is the center of the universe. But it's also got major problems. Here are some quotes:

It was now time to attain answers. And he had found his answers in SNAGROM -- a device conceptualized by his father, but built and made operational by him with a few modifications to avenge the death of his patriotic father who had sacrificed his whole life for the progress of beloved country, India, only to be publicly humiliated and pronounced a terrorist with links to Pakistan's ISI by the ruling party of India, The Democratic Alliance Party. [p. 23]

Mr. Bedi, Vikram's father, was a scientist. He had the unique ability to solve problems by using concepts of one domain, into an altogether different one - something which most academicians couldn't do. His papers and theories on early meta-systems had brought a fresh perspective and direction into the scientific community. In his papers, he reduced the bigger problems into simple ones. He put it very simply, a meta-system is a system based on other systems. [p. 35]

Arjun could feel this guy getting to him.... he was not a person who took even the smaller defeats sportingly. For him defeat was accompanied by a splurge of vengeance. [p. 68]

"It seems like he had conceptualized a system that replicated the modern day concept of Big Data trackers and used it to come out with trends which were closer to reality." Vikram whispered to himself. [p. 78]

But, was it all because of one man? How could a single man cause so much havoc? It must have been 'the system'. [p. 111]

For ten years, he had used his peculiar ability to suppress all sorts of mutiny within the alliance with an ease that always surprised everyone around him. Nobody had ever seen him running across the country to meet the influential people in times of crisis. He would simply make a private phone call and follow up the next day. The matter would be resolved. [p. 152]

So I didn't love the prose or the characterization. And one plot thread in Hackster disproportionately bothered me.

In the scene below, two guys are investigating a break-in by Vikram, a super-elite hacker. Vikram broke into the Srinagar police department's "criminal database" to remove his friend Ashfaq's name from "the list of arms dealer with a pending investigation" (sic). Initially, police investigators had overlooked the incursion: "They termed it a routine hack failure." [p. 17-18] But this new anti-cybercrime unit digs deeper. For context, both authors of Hackster have MBAs, one "in the field of telecom technology," and in the Acknowledgement they thank someone for cybersecurity advice.

"He deleted one entry and then used a jumbler on all the others."

"After deleting the entry, he covered his track by jumbling up the names of all the people in the list. I tried running a point to point match between the shuffled copy of this list with an older correct copy, but none of the names matched. In short the whole list is corrupted, and we will not be able to make anything out of it easily. It is a long list. It has too many names. This guy is a genius." [p. 51-52]

But then Aarti, a top-shelf cybersecurity expert, succeeds at extracting the name "Ashfaq Ahmed Karim":

"He didn't know that entire data of servers of police department gets automatically stored in tape drives at the end of each month. These tape drives are detached from the servers and are stored in a secret location. I took out an older version of Illegal Arms Dealer List from the backup tape drives and then wrote a program to match each word of the older list with the newer one and rearranged the new list accordingly."

Sumit and Rao watched her with awe as she continued further, "Even the most advanced computer of ours took two days to complete this activity and give us this one name. This one lead should help us to take a step closer to our target." [p. 82]

My suspension of disbelief at this point broke so hard that it sent shards into nearby brick walls, where they remain, softly vibrating. I'm willing to set aside, for the sake of fiction, how badly guarded this data is, and why does Aarti have to go to the tape drive if there's an older version of the list more readily available, and why are they acting like this is a giant string rather than a set of rows in a table in a relational database and thus amenable to additional forensic techniques. Even so: this kind of puzzle is practically a junior programmer's intro-to-Python exercise. You could do this in bash; you could do it in Excel. And unless the Srinagar police department is tracking pending investigation against literally millions of arms dealers, a bog-standard developer's laptop could run that script in, mmm, 20 minutes. 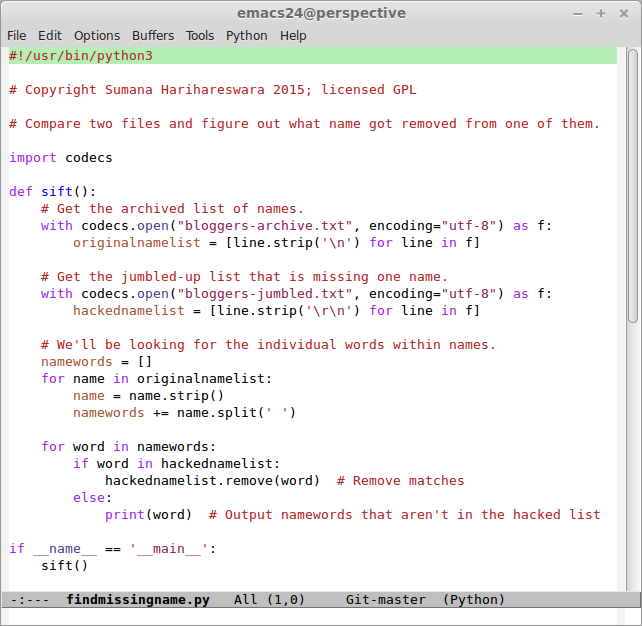 Hmmmmmmmm, how long would it actually take? I decided to try to replicate this, without even trying very hard and while listening to a Taylor Swift album on repeat. I took the 417 names from the Nielsen Haydens' old blogroll, put them into a file separated by newlines (bloggers-archive.txt), and then removed one name, and saved the new file as bloggers.txt. Ah but now I want to obfuscate it! So I pulled all the names apart into their component words and shuffled them randomly and then wrote that back to a file (code: obfuscate.py). The new, jumbled list looks suitably forbidding:

This points to an asymmetry I had not previously noticed regarding what will and will not break my suspension of disbelief. When I'm reading scifi or technothrillers, I am reasonably fine with magic zoom-enhance, encryption, robotics, and other implausible advances. I can deal with it if you have way cooler toys than exist in my world, if you tell me something hard for me is easy for you. But if you try to tell me that something easy for intermediate-skilled me is hard for hella competent world-class experts with best-of-breed gadgets, I laugh, because you're ridiculous.

I am married to a programmer whose code has literally been used to catch an illegal arms dealer. I highly doubt this repository is going to have a similar impact. But hey, I learned something new about my genre reading conventions and I practiced my Python 3.

How Knowledge Workers Can Learn More About Open …
A Hiking Trip

This is awesome Sumana! I also find that this kind of inaccuracy breaks my suspension disbelief beyond repair. I think it's because it makes the author seem uninformed, whereas the tech enhancements are clearly fantastic in nature.

Questions (unanswerable?), and answers to non-questions

Learning To Get Around In Java

Some Upcoming Availability: Talks And Coaching