The Triumph Of Outreachy

Right now, y'all can apply to the Free and Open Source Software Outreachy internships, formerly OPW -- the deadline is March 24th. Copy the flyer below to spread the word! And March 24th is also the deadline for your organization to sponsor internships -- if your employer has deep pockets, use this template to ask them for some cash. 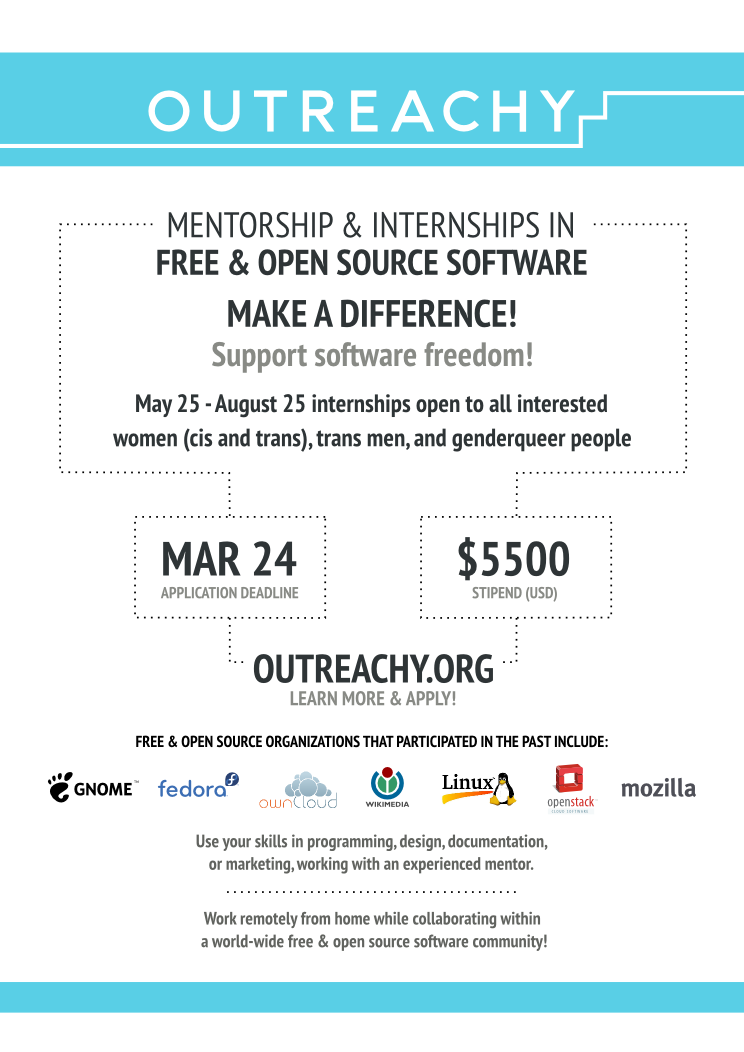 Outreachy has now taken several pretty wow steps over the course of its 9-year history (see the original announcement and a 2009 retrospective [edited 2022-06-14 to also link to this 2022 retrospective]). This is not complete, but:

When I saw, in mid-2012, that OPW had included a non-GNOME project, and that OPW had succeeded in getting the percentage of women at GNOME's yearly conference from ~4% (2009) to ~17% (2012), I decided I wanted Wikimedia Foundation to participate. I sought Zhurakhinskaya out at that year's Google Summer of Code Mentor Summit, my boss in tow. Zhurakhinskaya was already looking for me. We instantly agreed that WMF should participate. My boss, Rob Lanphier, trusted my judgement and gave me the budget to fund multiple interns. Zhurakhinskaya helped us decide to expand our contribution.

In the end, we got six interns for that round, thanks to WMF's contribution and to money Zhurakhinskaya and Karen Sandler got from Google's Open Source Programs Office. Wikimedia has kept on mentoring via OPW/Outreachy, several have stuck around as volunteers, and WMF has hired at least four alumnae as contractors or employees. Outreachy works to help recruit and retain technical contributors, who have more diverse perspectives, more than the event-based or publicity-only initiatives we'd tried before.

OPW helps oppressed people do things they didn't think they could do -- and thank you Outreachy for helping WMF do something we didn't know we could do. :)

Congratulations! And here's video of "The Outreach Program for Women: what works & what's next", a talk that Liz Henry and I gave last year at Open Source Bridge.

GSoC, GSoC, Who's There?