"Devil's advocate" was a job. In order for someone to perform the role of Devil's advocate, someone else had to appoint them to that position. And the Devil's advocate performed a bounded task within an established relationship with his debate opponent, towards the shared goal of a particular decision (whether to canonize someone).

Socratic questioning is a technique that a teacher uses with a student when both of them have agreed to that relationship. It includes a commitment by the teacher to the student's intellectual growth, and a variety of techniques in reflective listening.

I hang out in a lot of communities and with a lot of friends who care a lot about seeking truth and avoiding delusion. That's an admirable thing to want.

But in acting out these values, sometimes we misuse cool-looking tools, like Socratic questioning or the Devil's advocate position, by using them when we don't yet have a trusting relationship or (in particular with the "Devil's advocate" approach) a defined question and decision framework. For instance, if you consistently say things you don't mean in arguments, the people you are arguing with will come to trust you less. My friendships, work relationships, and hobby communities usually sit in the "caring" or "collaborative" part of the caring-to-combative spectrum;* if someone starts a competitive or even combative conversational game without first taking care to establish a magic circle, that breaks trust.

In conversation, when I find that I don't agree with someone else, I assume that our shared goal is to reach a mutual understanding. Perhaps one of us will persuade the other, or maybe we'll just understand why we disagree. But I'm open to revising that assumption in response to certain signals. When the person I'm talking with starts demanding that I stop to create and defend formal definitions for any word or phrase that I use, distributing the work of creating a shared understanding unequally, or cross-examining me without putting up their own point of view for examination, there's a level of disingenuousness there that I object to (the flip side of which a 2017 XKCD illustrates): 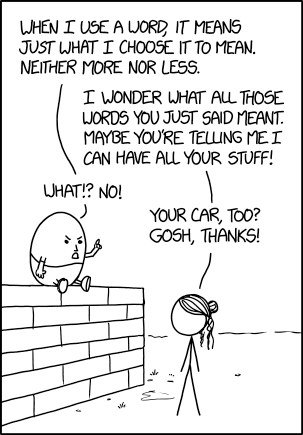 And the phrase "I'm just playing devil's advocate" in an online discussion, when the poster has not already asked others whether that's desired, is one of a suite of linguistic markers that make seasoned readers shake their heads. Because, as Alexandra Erin points out, "The phrase has basically morphed into Internet Argument Guy for 'I can argue with you but you can't argue with me.'"

If you want to "play devil's advocate" with me, or Socratically question something I've said, ask first, and mean it. And, as you reflect on whether you actually want to do that, consider the many other conversational approaches you might use instead.


* In retrospect I wish I'd considered this spectrum when discussing the liberty-to-hospitality spectrum.

Here Are Some Grants You Could Apply For