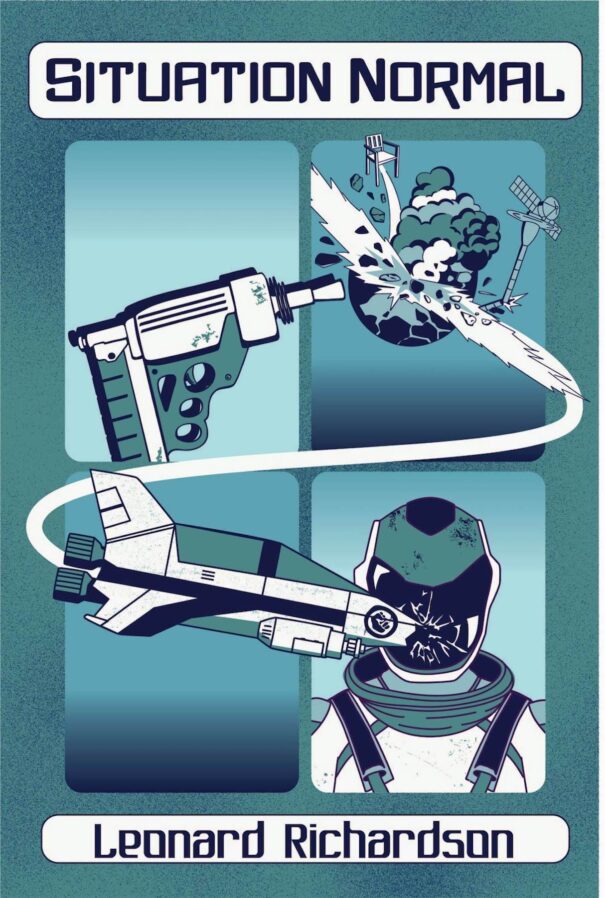 My spouse Leonard Richardson has written a second novel, Situation Normal! Publishing house Candlemark & Gleam will publish it on December 14th, 2020. You can preorder it now in ebook (Kobo, Nook, Chapters Indigo, Kindle) or in paperback (Bookshop, Amazon, Barnes & Noble)! And there's a worldwide giveaway right now, till December 13th, for a free ebook copy!

My elevator pitch for Situation Normal is "the Coen brothers do Star Trek". It's a military SF story where no one is incompetent but everything goes wrong.

Kobo and Indigo have a free preview up, so you can see the content notes and start to meet Becky, Hiroko, Myrus, Churryhoof, Dwap-Jac-Dac, Arun, and the Chief.

"The Fist of Joy," said Dad. Just the name took him back to the previous war.

"Nuh-uh. An Outreach Light Combat Platform. Brown v. Board of Education of Topeka."

"That's us, Jiankang," said Dad. "They're the good guys. Why are we running? This is insane."

"Who knows what they want," said the mayor in a tone that was either flat or full of adult emotions Myrus didn't understand. "They've been sending us urgent messages, but the Navy drafted our comm tech last month, so we're not that good at decrypting."

"Who made this decision?" said Dad. "Why wasn't the council consulted before we committed treason?"

Cory Doctorow likes Situation Normal even better than he liked Leonard's first novel, Constellation Games, which he called "an underappreciated masterpiece" and "one of the best political books I've ever read, an account of the poison chalice of societies based on coercion that puts great works of anarchist fiction to shame". Doctorow calls Situation Normal:

A triumph: madcap and trenchant, dancing on the precise meridian between funny and weird, with a wild, imaginative boldness that reinvents space-opera from the gravity well up.

And the American Library Association's Booklist gave Situation Normal a starred review, calling it "A fast-paced romp reminiscent of Kurt Vonnegut channeled through the wild inventiveness of Charles Stross and the irreverent political attitude of Cory Doctorow" - again with the Cory comparisons.

On Wednesday Eve Was Not In Nyack

GeoGuessr and Its New Monuments Map