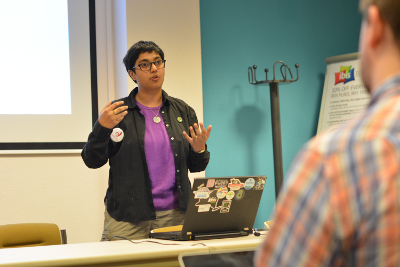 I'm Sumana (pronunciation), the founder of Changeset Consulting, and I frequently write and speak on open source, management, and other topics. I also perform stand-up comedy specifically written for tech audiences, and speak on podcasts and panels.

Invite me to speak.

Below is a list of some of the public talks and presentations I've given, with links to audio and video recordings, notes, slides, and transcripts.


Other conference talks and presentations

Invite me to speak

Please contact me to invite me to speak (seriously or comedically) at your event or organization, or on your podcast, or to give testimony in a legislative or judicial hearing. If your organization or conference is for-profit, I will be much more likely to be able to speak to you if you offer an honorarium.

Availability: I am available in person starting in August 2021, and for virtual events starting in May 2021. Except in extreme circumstances, I need two months' notice to deliver a talk (including performing stand-up comedy), and two weeks' notice to speak on a podcast or panel.

About me: Sumana Harihareswara is a project manager, programmer, and standup comedian who leads a consultancy to help open source projects level up. She led the rollout of the new PyPI.org, and has worked on Zulip, HTTPS Everywhere, Mailman, MediaWiki, and several other open source projects. Most recently she has managed improvements to pip's dependency resolver and user experience, and has expedited the release of new versions of pipenv and autoconf. She's working on a book to teach what she's learned about rejuvenating legacy open source projects. She earned an Open Source Citizen Award in 2011 and a Google Open Source Peer Bonus in 2018, and participated in Recurse Center in 2013 and 2014. She lives in New York City and founded Changeset Consulting in 2015.

My comedy sets (10-30 minutes long) include: What weird unusual licenses should the Open Source Initiative consider next? Where's the fine line between maintainer success and maintainer burnout? Should we alias git reset --hard to git regret --hard? I've been in free and open source software for years, and I perform stand-up comedy about it. I joke about why I don't use Facebook, bug reporting and why it ought to be taught in schools, what it means to "succeed" in free and open source software, and more.